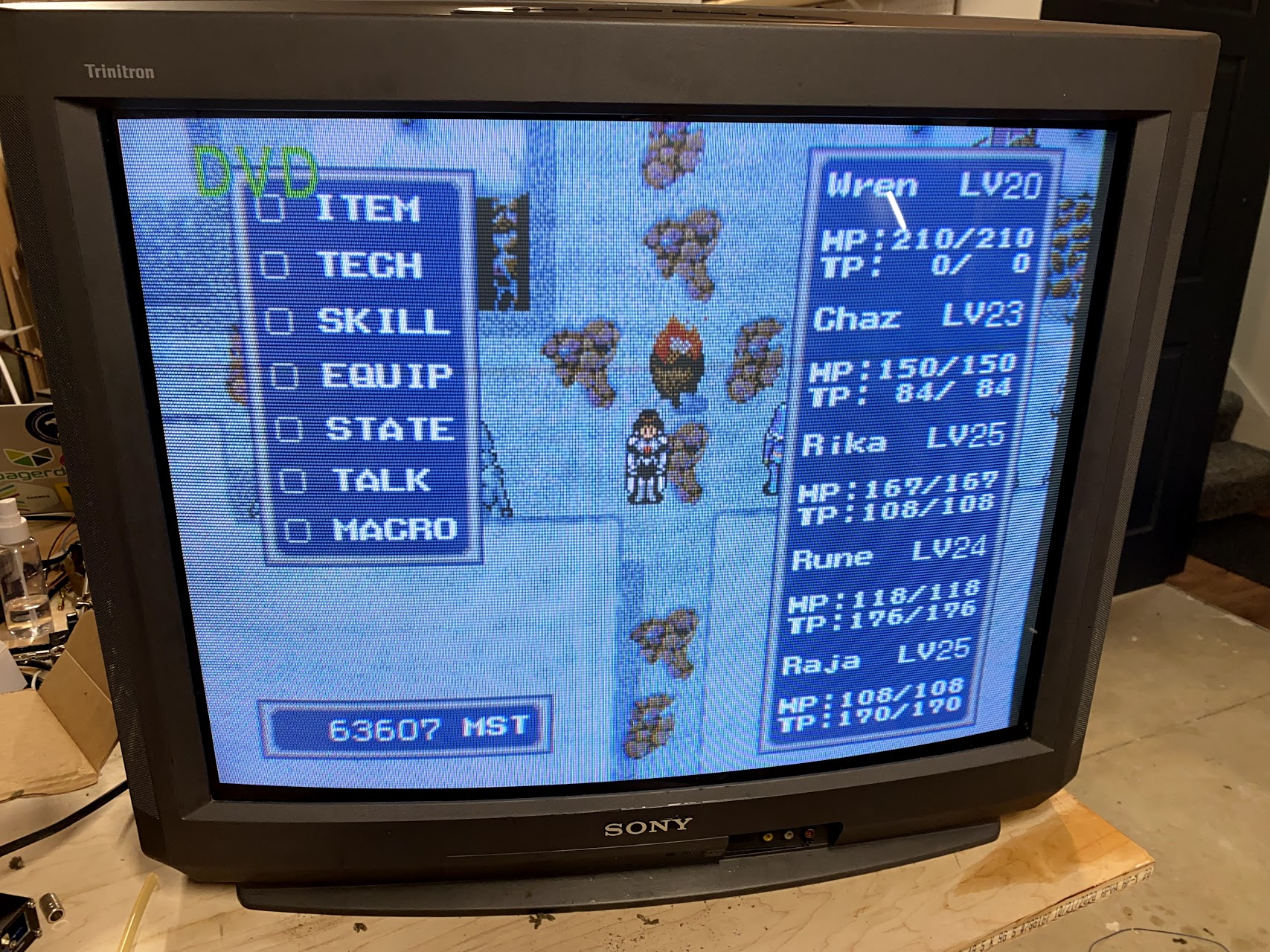 Why and background information

The Sony KV-27V66 is a 27 inch CRT TV, with the famous Trinitron tubes and a BA-4D chassis. Unfortunately, it only exposes Composite and S-Video inputs. While S-Video isn’t that bad, we can probably do better by modding it to accept RGB signals. You can read and learn more about RGB modding and it’s advantages here and a lot of more information about modding TVs on this shmups forum thread. This should probably work on the 27V42 and other BA-4D chassis as long as they have the same or similar Jungle ICs.

While this RGB mod works and it’s theoretically the best way to do it, it’s maybe a little too complicated. We made it mostly to prove a point. There are easier alternatives for the BA-4D chassis based Trinitron TVs: Component Video mod and RGB Mux mod.

Documents you may want to get acquainted with:

The Service Manual shows that the TV uses a CXA2133S Jungle chip, we weren’t able to find a datasheet for it anywhere. The CXA2061S data sheet is a pin match, and the I²C information matches probably 90% of what We investigated so We will assume they are the same for all intent and purposes.

The TV Jungle chip has a second, unused, RGB input. Those are on the pins 26-28, with a YS1 selector on pin 25. Putting voltage between 0.7 and 7 volts on that YS1 pin selects the input, unless the RGB SEL register on the Jungle memory is set to 1. Of course, Sony sets that to 1 by default, so our mission here is to revert that heresy.

There are many methods to do that, Adam aka PCBJunkie has a very good video and article about finding and defeating the i2c commands for a different model. We tried that method but We wasn’t able to make an Arduino work fast enough to deal with the changes. A second method is the one used by Martin from immerhax.com to fix the RGB on some JVC monitors, and that’s the basis of our current method.

Basically what we are going to do is to intercept the i2c communication between the Micom and Jungle chips, watch for certain registers to be written/read and change the values on the fly.

So the first thing was to find out what is the normal initialization procedure on the TV, so we could find what kind of change we would need. We hooked up a logic probe to the I²C bus and watched specifically for the 0x44 slave address (that is the Jungle IC 7-bit address).

So the Micom writes data to the Jungle registers (described on page 17 of the datasheet) in groups of 3 registers at a time. So on that capture above we have the write starting at address 0xC and then writing three bytes, so it writes the registers 0xC, 0xD, and 0XE. In the datasheet they are in binary but they are the registers 12 (1100), 13(1101), and 14 (1110).

The register we are trying to change is the RGB SEL one, that is on address 0xA, but since the Micom sends that data in groups of three, it will actually be contained on the second byte of the 0x9 register data.

And, as expected, the Micom does indeed send a 1 there:

The second, and maybe most important, thing on the Jungle I²C is Status Register read, that the Micom repeats every second or so. It simply read the two bytes from the Jungle Status Register to decide if the IKR bit (related to the self diagnostic circuit) is set to 1 or not. If that’s false, the CRT cannon is shut off or the whole set turns down. We will then have to make sure the Micom receives the correct status for this to work.

So now that we know what to do and why, all we need is to get an arduino midway there and change the data when needed. We tried many approaches, some worked better than others. Currently, the one we are using and probably is the most cost saving and hand soldering friendly one is to use a Pro Micro Arduino that is a smaller version of a Leonardo and have been used a lot for custom keyboards and other USB based applications.

The Pro Micro is small, has 5V pin logic, one I²C interface that we will use as Slave, and can be powered by up to 9V so we don’t need to worry about that either. It also has enough speed to be able to run a software I²C master in a speed that isn’t causing us problem.

We also made a version using a Black Pill STM32F303 that is a monster MCU for this and totally unnecessary. It has two I²C interfaces so we don’t need to worry about bus speed, but it needs level shifting (since it’s a 3.3V logic MCU) and a power source since we don’t have good places to get enough amps on a 5V standby power.

The code is available at Github, it’s a Platform.io project but it should be a 1:1 copy/paste situation to the Arduino IDE. It is also heavily commented so there’s not much we can add here, use the source, Luke.

The gist of the code is:

Opening CRT TVs and poking around is NOT 100% safe, specially if you don’t take the necessary precautions. If you are unsure or never heard of discharging a CRT Tube, flyback voltages, and high voltage, we urge you to go learn those things. There are many videos on Youtube showing how to discharge a tube and be safe while doing that.

This is the schematic for what we are doing (linked to the PDF too): 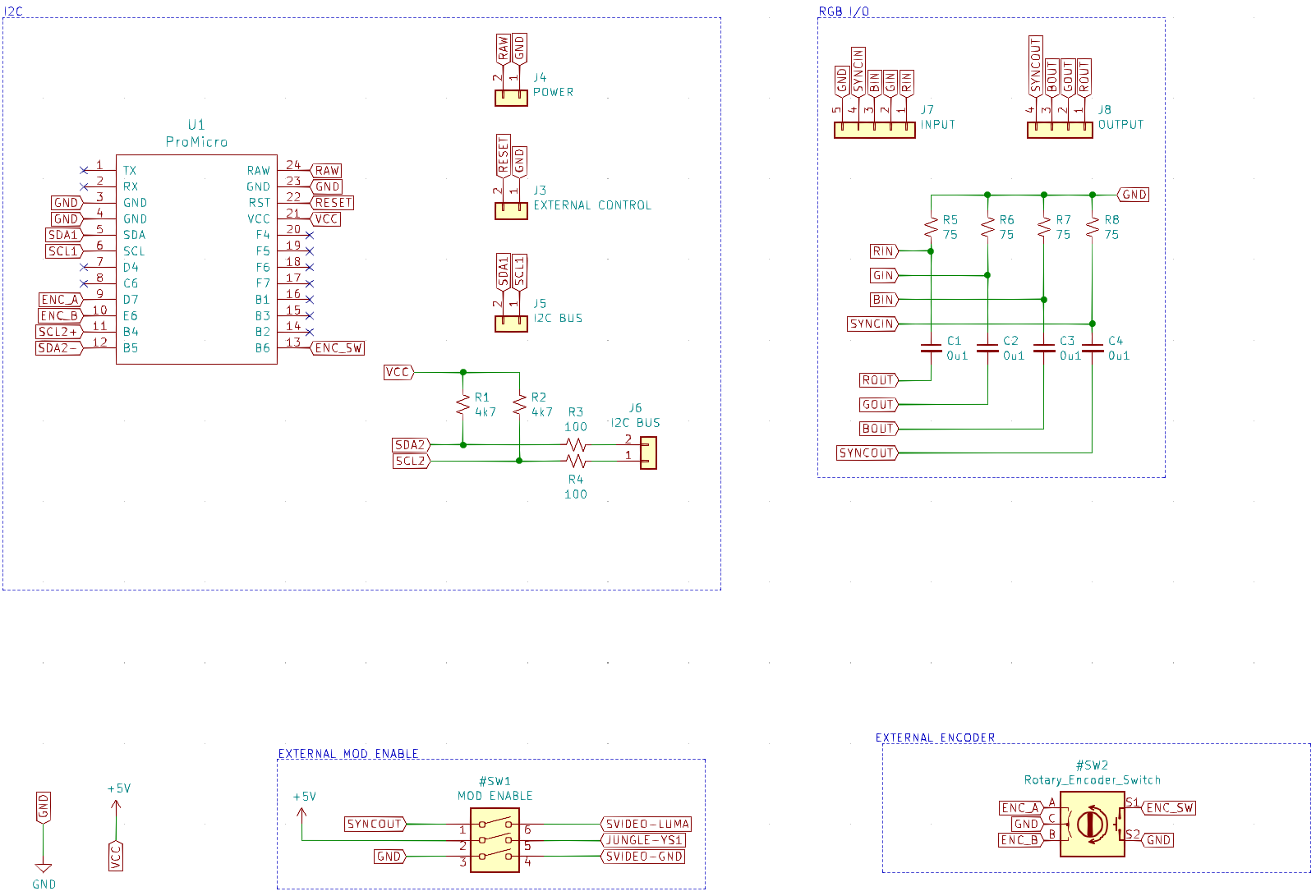 The RAW pin is getting the 7.5V from the TV, all the rest is using the regulated 5V from the VCC pin from the Pro Micro. The mod Switch can use that same regulated 5V, but we prefer to use some other 5V directly from the TV to avoid mixing up voltages on the wrong place.

The external control header is optional. Having a button for resetting the Pro Micro may or may not be needed at all.

Interrupt the Jungle path with the i2c bus

The best way to do that is to remove the two SMD resistors on the bottom side of the main board that are in series with the Jungle’s SDA/SCL lines marked as R330 and R331. They are on the bottom of the board since they are referenced as chip on the schematic and that means SMD. 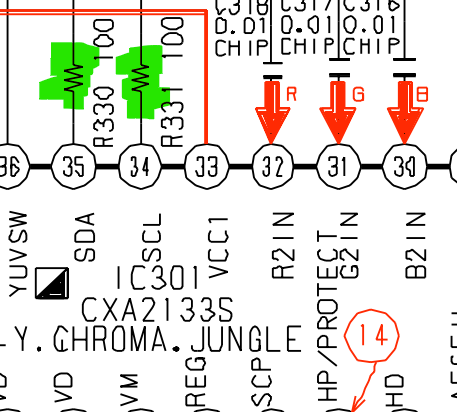 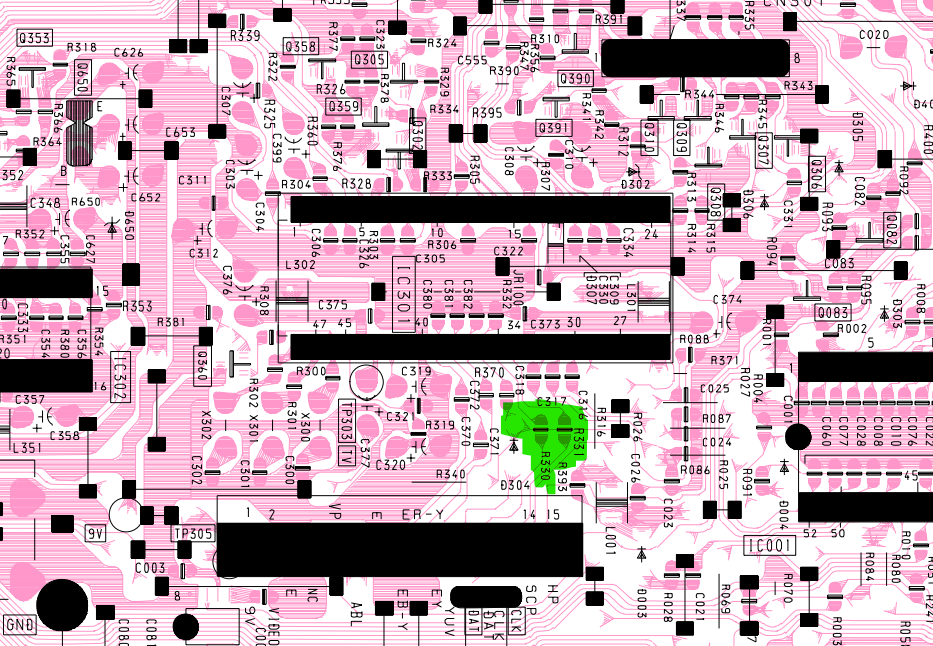 Unfortunately we were too hasty putting stuff together and ended not snapping photos of the actual PCB but trust me the resistors are there. You will need two wires coming from the Jungle side soldered to those pads and going to the mod.

Use the CN150 connector on the left side of the board to also get wires for the SDA and SCL bus connections we will need later. 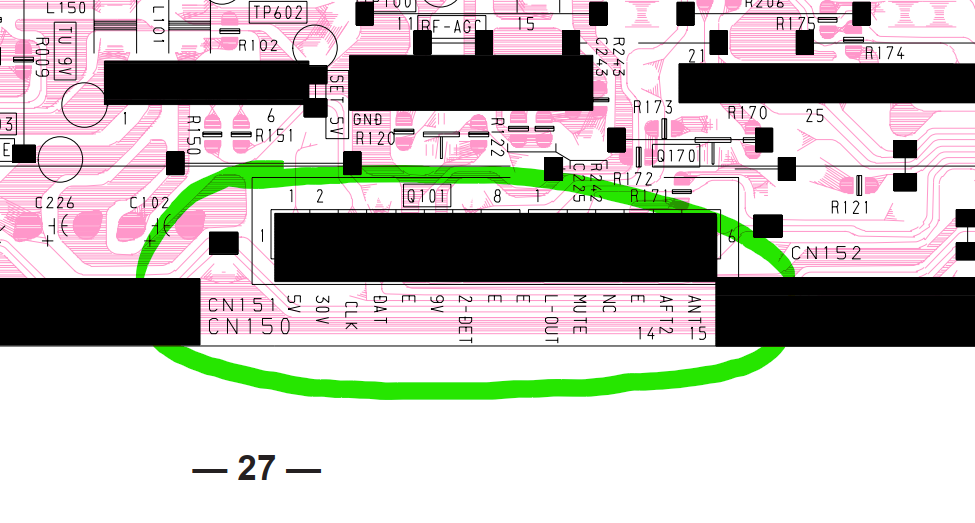 Find a source for GND, 5V and some standby voltage

The TV has a 7.5V standby voltage circuit and a 5V one. The 5V one is connected to an IC that has a maximum current that is very low for our plans (100 μA). The 7.5V circuit though, seems to be fine and has an exposed test point that we can solder a wire to. The GND is easily found using the GIANT CN101 connector on the bottom left of the board, hard to miss a giant blob of solder with a single pin sticking on it.

There are plenty of places with exposed non standby 5V. We will use the left side connector CN150 since there are other stuff that we need there too. 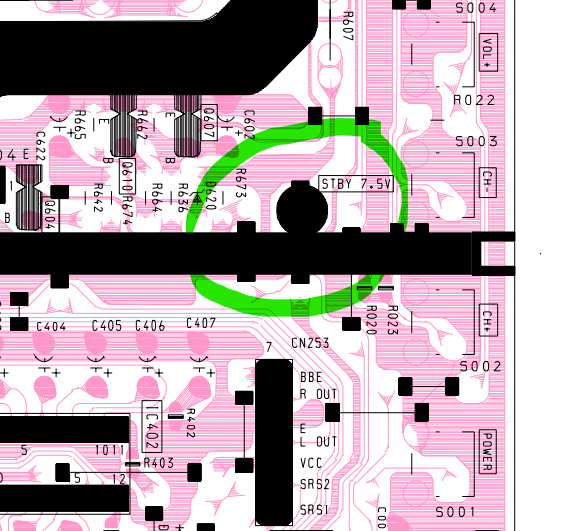 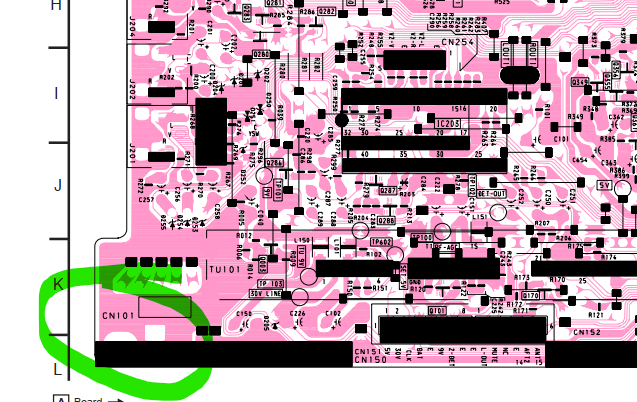 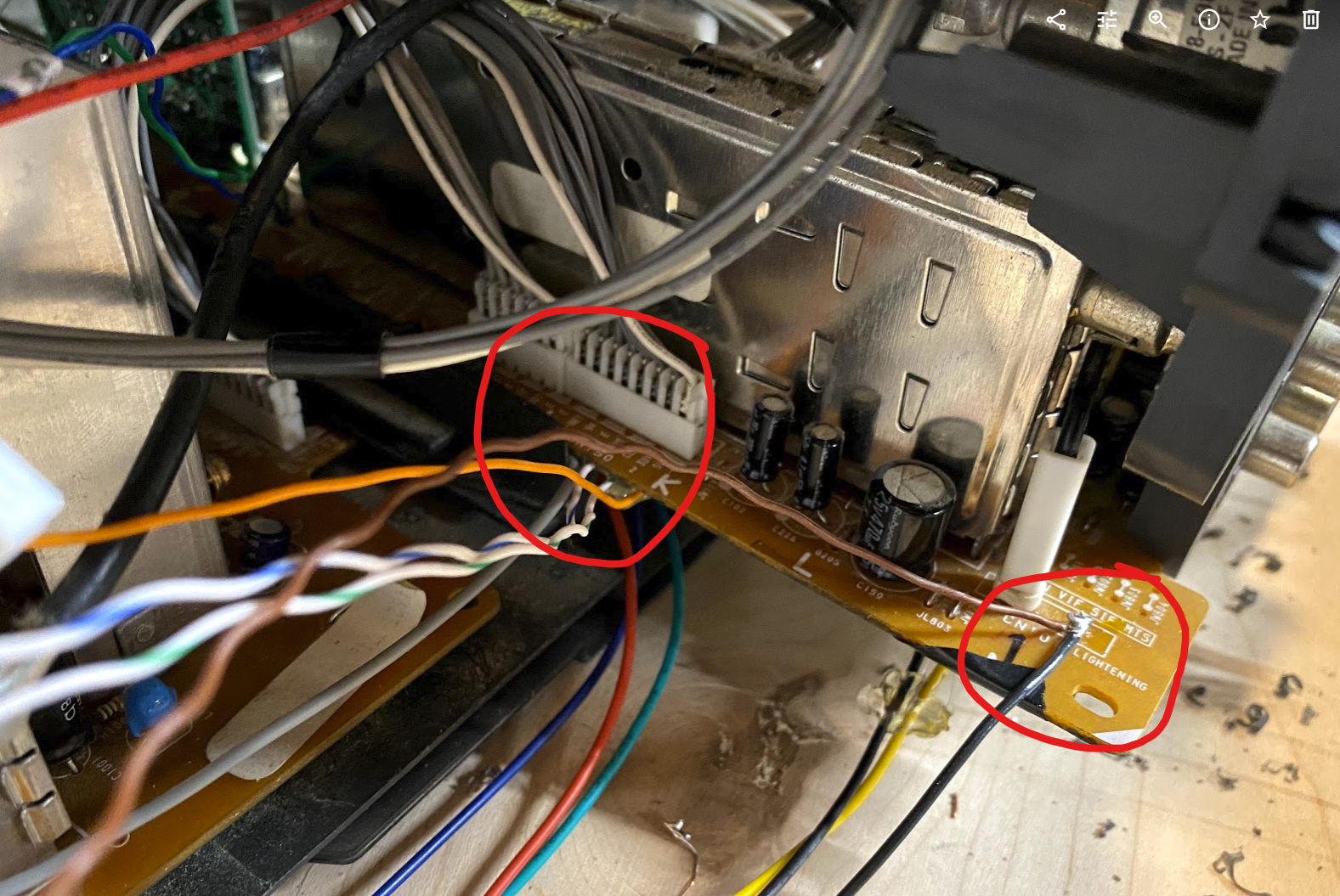 Whatever you prefer, we soldered tiny wires to the underside of the board but it may be easier/more feasible to connect to the pins on the upside of the board. As long as you get the four pins, it doesn’t matter. 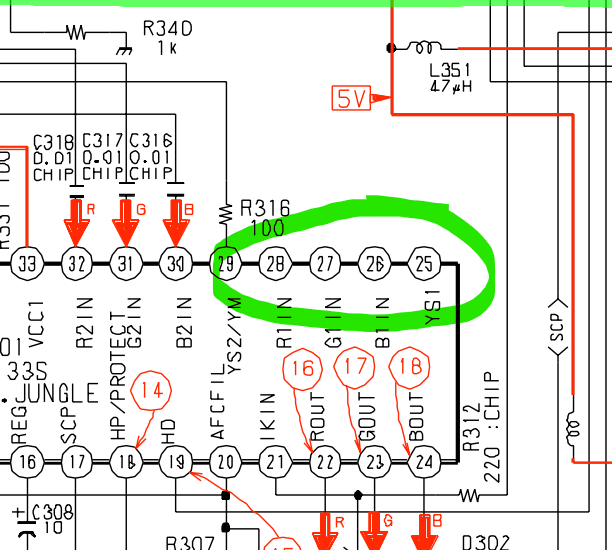 Using the composite input for sync is feasible, but that makes the image to be really skewed to the right. That was also a problem on the Component video mod, and their solution is still valid here. Refer for the images on the post to see where to solder the sync and GND inputs for that to work (it’s the last image with labels SWITCH and LUMA).

You can also get a S-Video connector and add GND and SYNC to it, making sure the SYNC is going into pin 3 of the connector (Luma).

Board image for reference

This is an image of the whole board with the places we mentioned above highlighted. We also circled the Jungle chip position. Remember that this view is from the solder side of the board so it’s upside down. 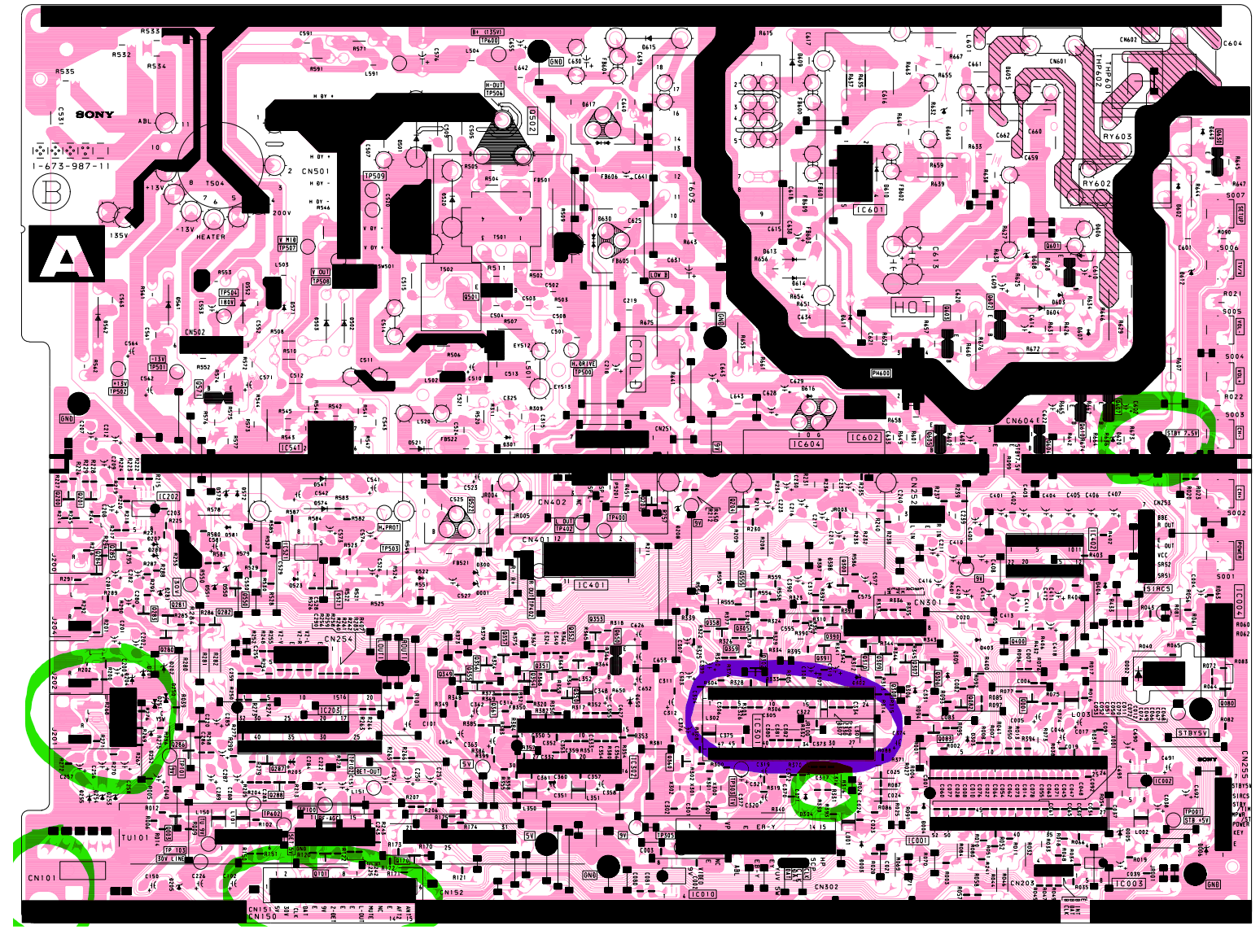 We added a switch as suggested on the Component Video mod to make sure we don’t lose the S-Video input and to be able to disable the RGB input. There will be an schematic with all the connections bellow somewhere.

We added an encoder to the project and the respective code on the arduino side. At the moment all it does is to change the HPOS value so we don’t need to go into the service menu to change that on different MiSTer cores (like the neo geo one). Probably should be easy to add other values and stuff to do that, but then we want to add an LCD and the scope creep is just too much. Feel free to play with it tho.

Final words, thanks and tools

There are probably better ways to make this work, and this may not even be the best image quality for this situation. We have a S-Video connector/adapter and in the end we may use it more than the RGB input, but at a certain point we just wanted to make it work.

None of this would have been able without the help of a lot of people. So thanks Adam/PCBJunkie for responding our numerous emails and providing very good videos, people from the Arduino Discord, CRT Discord that provide a lot of information about how I²C can be worked, and how old TV analog electronics can be flimsy, aside from general encouragement when we were out of our wits with random weird behaviors.

Things would have been hairy without a logic probe and Pulseview, so yay open source saves the party again. You also should take a look at PlatformIO for embedded/MCU development, it makes it much easier to have a single IDE/environment supporting different boards.